We’ve arrived at our first itinerary destination. Our eight hour train ride ended at Union Station in the heart of downtown Chicago. Dark, damp, and industrial, the station platform seemed at first like a cold reception. Once inside the station proper, however, our shivering ceased and we were warmed by radiant marbled staircases flowing upwards unto the clamoring streets above. Exhausted of anything to do with rails, Sarah and I hoofed it about for about twenty-five minutes (no small task considering the weight of our packs, at least 50 lbs a piece) until we reached the Hostel International Chicago. So far I have nothing but good things to say about the place; modern amenities, a private bedroom (shared bathroom and living area), and a mere five-minute walk from the nearest metro station all for $55 a night (this includes both of us). Not too shabby. 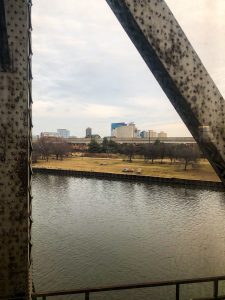 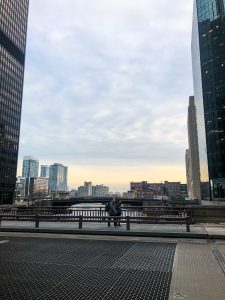 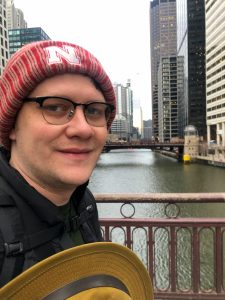 With nothing in our gut but some overpriced Amtrak potato chips, our next most pertinent need became food. Something decadent but cheap, something to awaken our inner gluttons while quieting the needling protests of our wallets… Eureka! A meaty slab of Chicago-style deep dish pizza. What else? That’s how we found ourselves at Gino’s East (South Loop) directly after shouldering off our packs. House made mozzarella sticks and a 9” pie took us straight to carbohydrate heaven, the reversal of toppings (sauce, meat and veg, then cheese) adding some much appreciated novelty to the meal. Upon discovering that we were far from home, our overbooked waitress was kind enough to take the time to explain that we should venture out from Chicago’s “touristy” urban center in favor of some neighborhood fare. We took her up on it and navigated to Lincoln Park the following day. 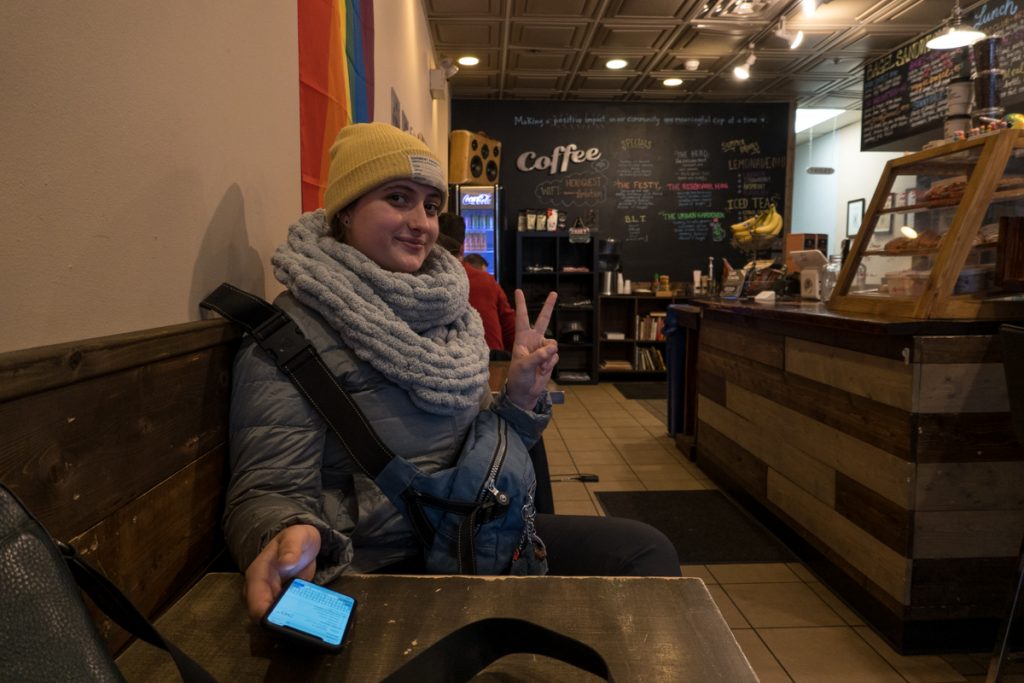 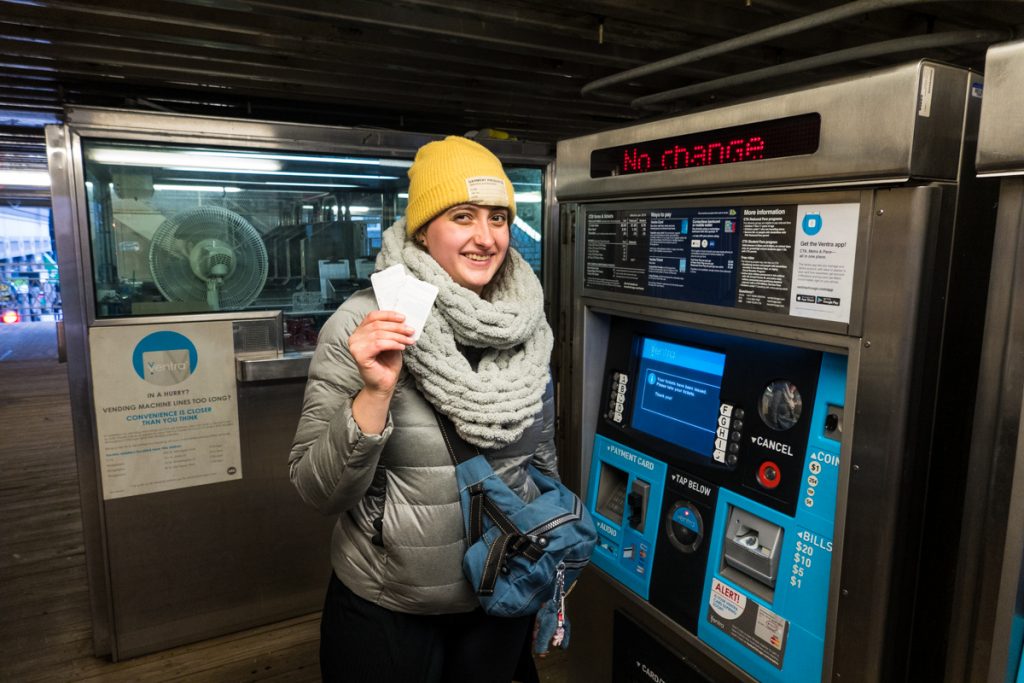 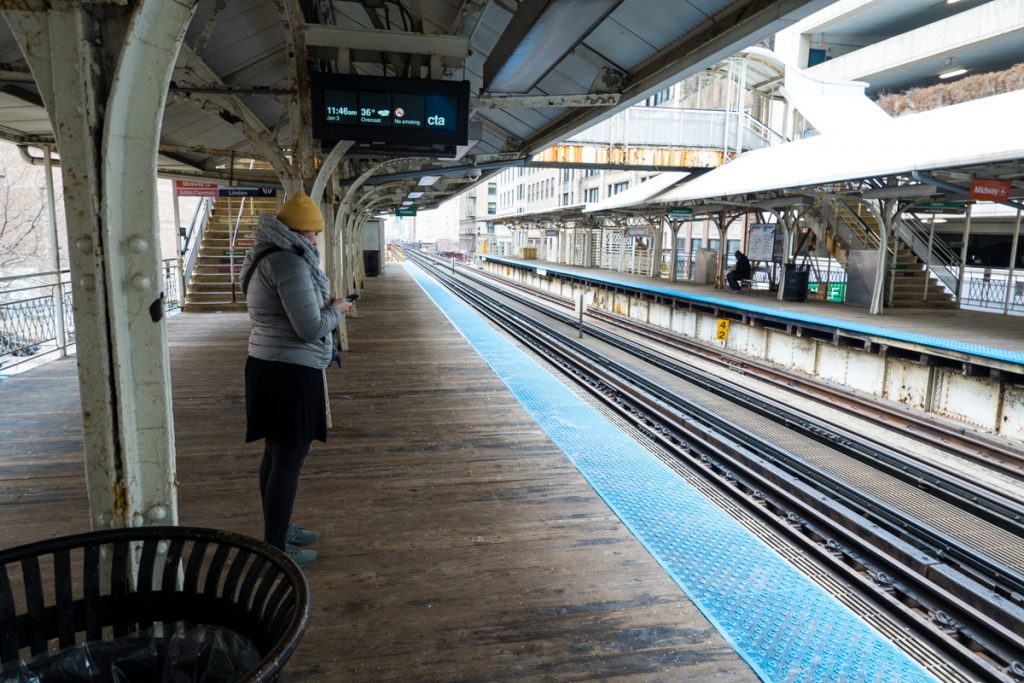 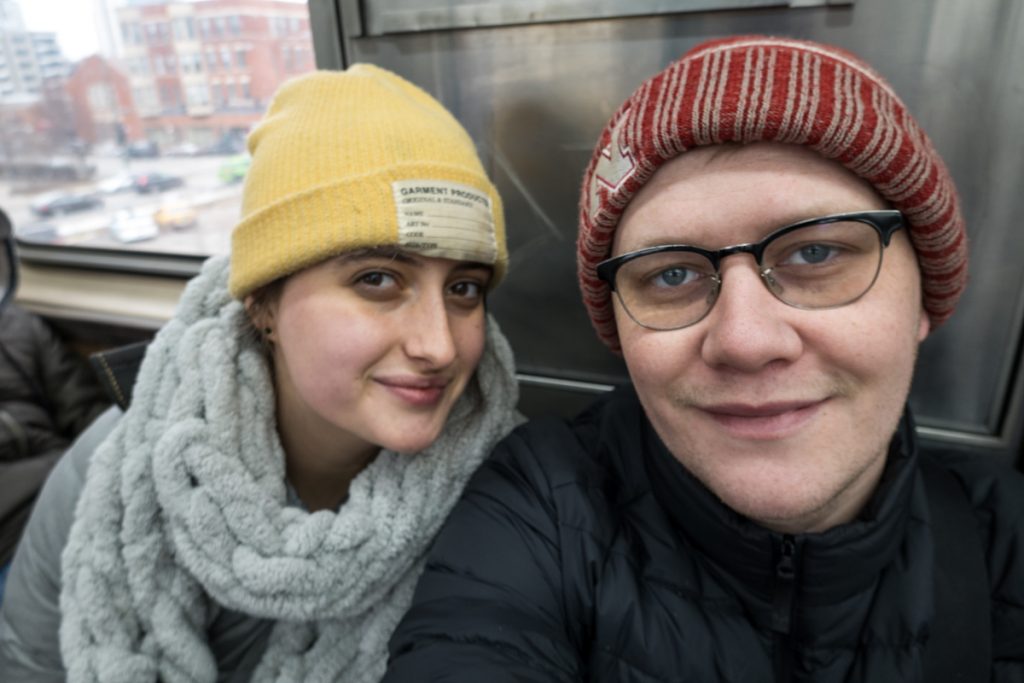 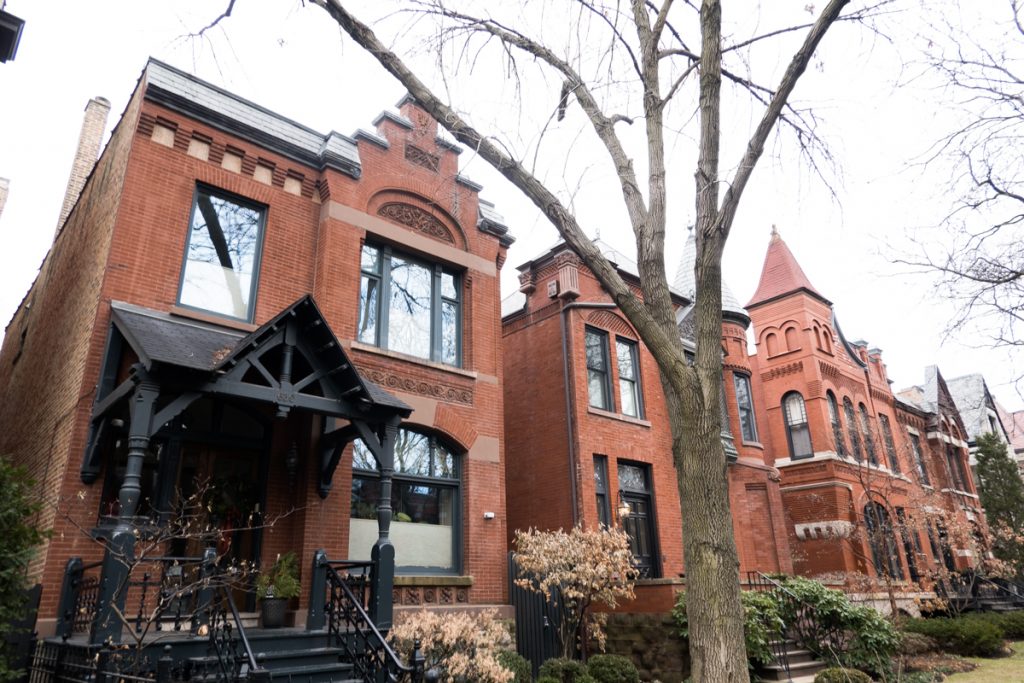 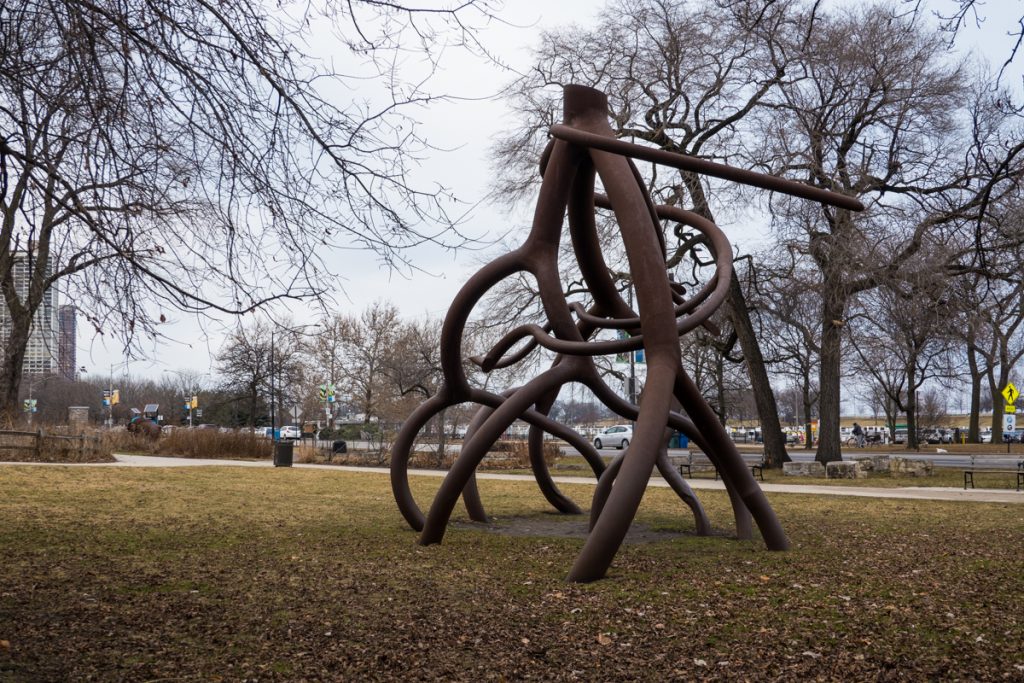 Upon departing the metro, Sarah was kind enough to personally survey the health of the local dog population. Yep, a nice healthy log right on the bottom of her shoe. She’s quite the dog lover, you know. Missteps aside, our walk East on Fullerton Parkway towards Lincoln Park was a pleasant one. Edwardian style houses lined the street, parted occasionally by the monolithic steeples of local churches. Along the way, a dashing blind man carved a path of sound to some unknown destination. We followed his rhythmic tapping, and his fedora, to lunch that day. If you’ve ever wanted to encounter cheeseburger built horizontally rather than vertically, this is the spot for you. We split a 12” “Bro Burger” Philly from Chicago’s own halal adhering Philly Bro’s restaurant. Yum.

The absence of skyscrapers on the horizon was the first hint that we were approaching our penultimate destination. Behold, Lake Michigan! A waveless mass of blue undulating softly in every direction. A severe outcrop of skyscrapers meeting the timid waters at the southerly shore. Marvelous. We snap some photos and head back to prepare for the night ahead. 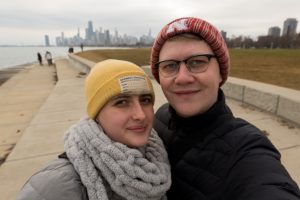 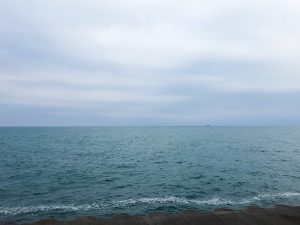 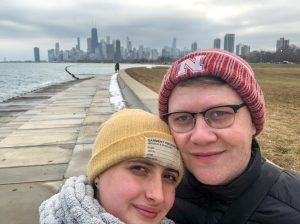 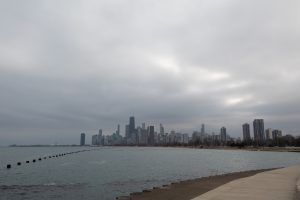 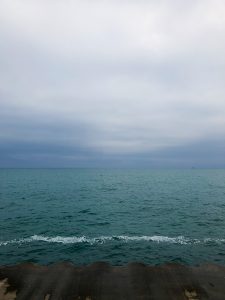 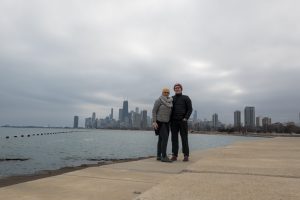 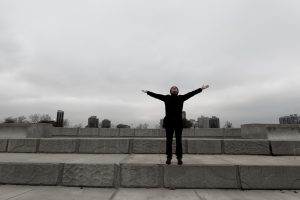 Admittedly not knowing as much as we should about our fellow Midwestern city, Sarah and I landed on ‘jazz’ as something we’d like to encounter in terms of Chicago nightlife. Hoping for some live music, we were instead treated to Ed Sheeran and other contemporary pop at the Signature Room on the 95th floor of the Hancock Tower. Though the music did it no justice, the ambiance was incredible. From up there, the lights of Chicago mirrored the candle at our table– flickering demurely, longingly. Their combined luminescence formed a hazy glow above the city. Beneath and above it all, Sarah was there. Absolutely stunning. After a stiff cocktail we descended in search of jazzier pastures. 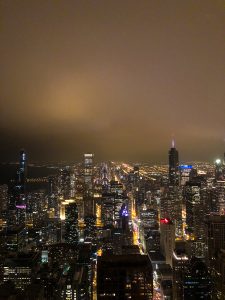 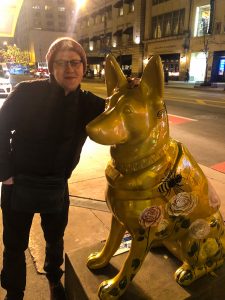 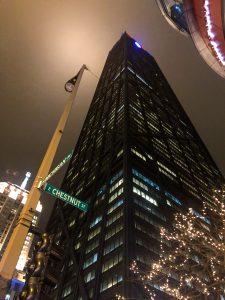 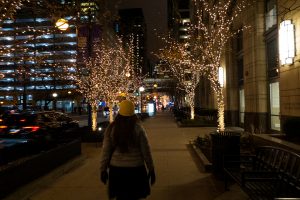 Another 20 minute walk (thankfully with only satchel and ‘murse’ in tow) found us at the Winter’s Jazz Club. Dark, moody, and intimate, this space had all the trappings of what we were looking for. We’d arrived early enough to skip the cover, though only seats at the bar went unreserved. No issue, as an opening in the center of the bar offered the perfect frame for the stage beyond. We also had the good fortune of meeting Jane, originally from Zimbabwe (though English in parentage and accent) with whom we discussed everything from politics and inflated college tuition, to life philosophy and, of course, travel. Though settled in Woodstock, Jane shared with us her experiences with world travel (of which there were many) and Sarah and I expressed both our envy (at the cost) and our shock (at the relative lack of safety regulations) that traveling in the 80s afforded compared to now. Together we sipped whiskey, our cheeks growing rosier and our hearts growing closer before at last, the band took the stage. The Victor Goines Quartet Band did not disappoint, as Goines’s buttery smooth tenor sax lifted the entire room before the band’s drummer punched out an uproarious beat before slowly, yet steadily decreasing the same arrangement to hardly beyond a whisper. The crowd was spellbound, us included. After a few more performances, including a dynamite rendition of Horace Silver’s “The Natives Are Restless Tonight,” hunger got the best of us and we bid Jane a heartfelt farewell.

In an attempt to ward off the quickly declining temperature, we decided on something hot and spicy. The Indian Garden did not disappoint, as we shared a pot of Murg Madras (chicken cooked In spicy gravy with coconut milk & coconut powder) and two steaming bowls of mulligatawny. Delicious. 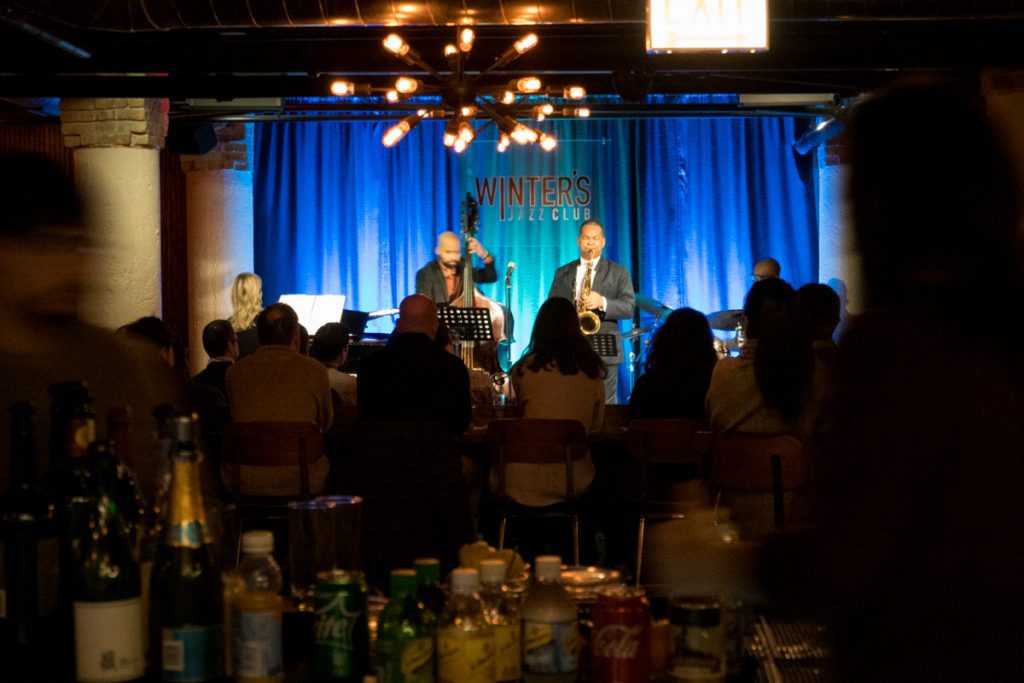 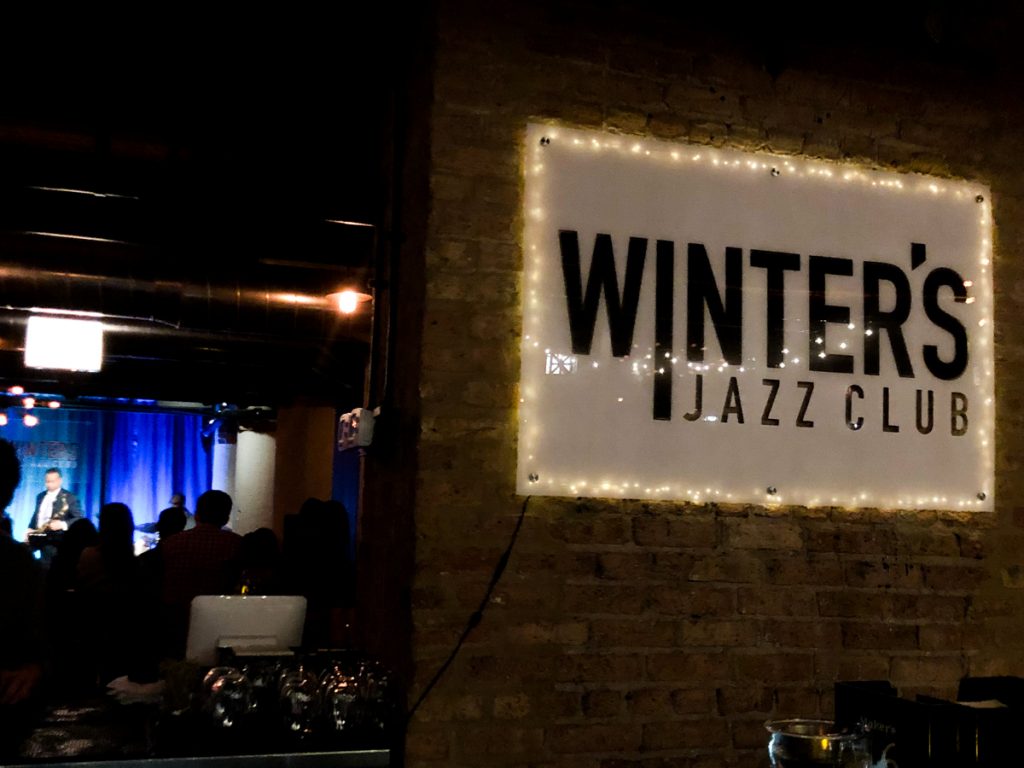 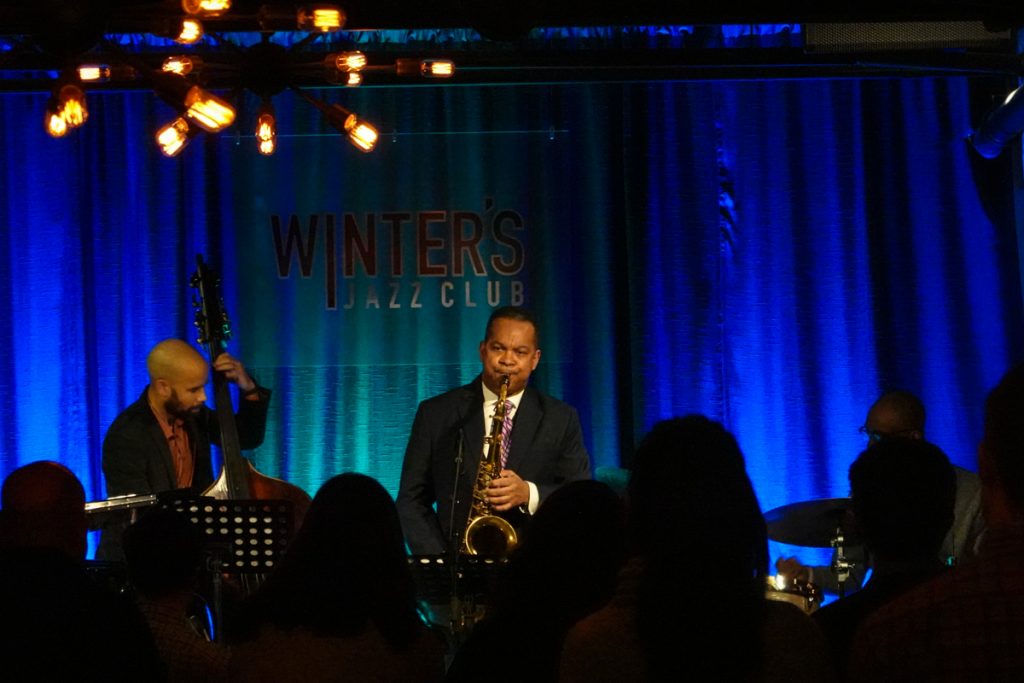 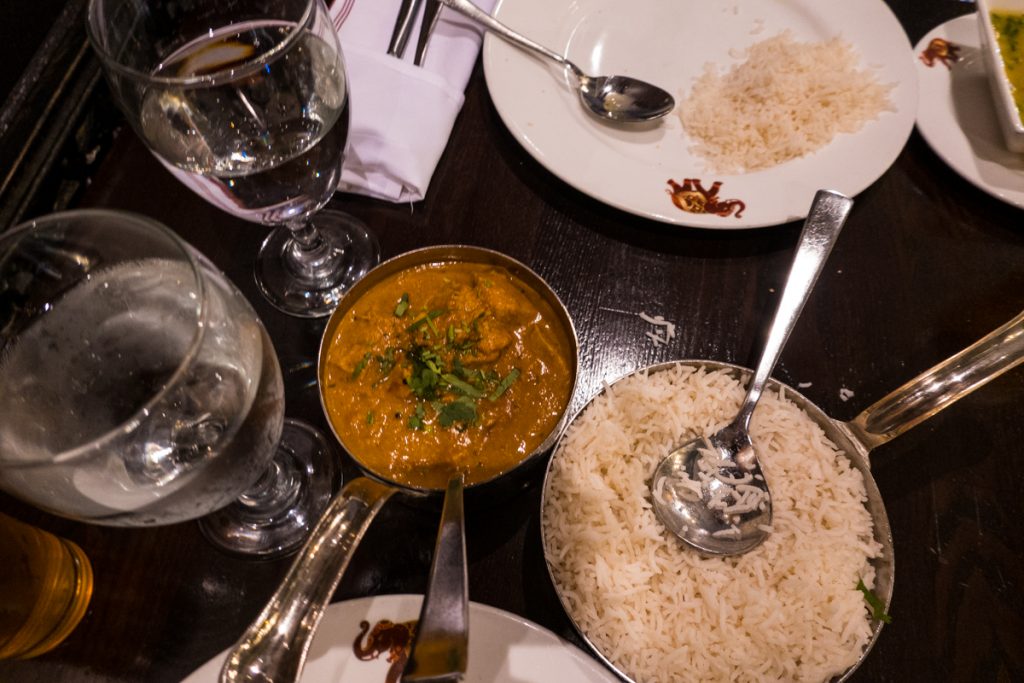 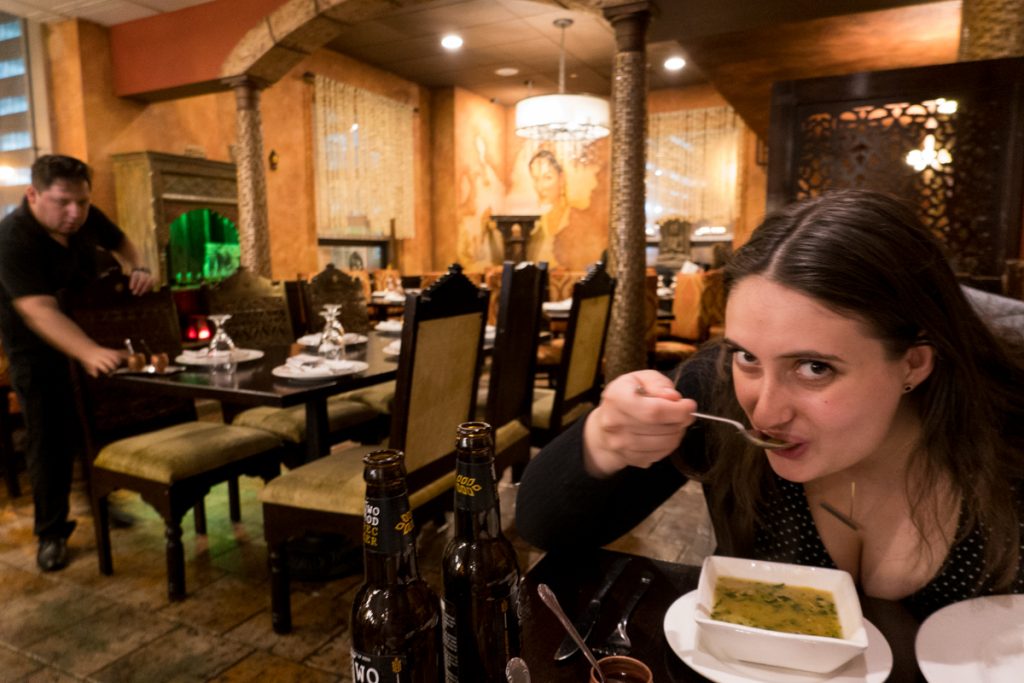 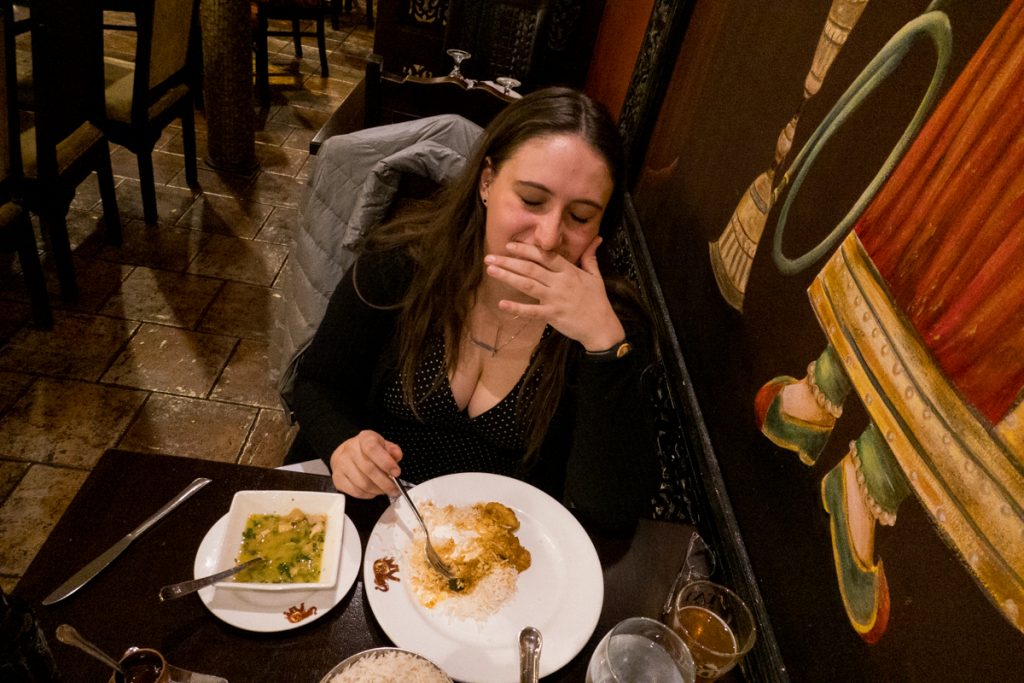 Enjoying Chicago even more than expected so far.